Bella (BelSu iz mira älf) had her show debut in Kassel, Germany! On Saturday there were two in the puppy class, Bella got the vp1 :-). On Sunday they were even a threesome in the puppy class and then Bella got also the vp1 :-D, I had to be with little Baya (Russkiy Toy bitch) in the ring in the same moment, so I would like to say thank you Susa Leeb, which has led to this day Bella to victory! We are very pleased with this successful start! Diva, I had entered on both days for the Working Class, she was indeed alone, but in this class she got both times an Excellent, so EXC1, VDH. On the first day she was allowed to “New German Champion VDH” call. Although she is already champion of beauty and performance, and also German Coursing Champion, she was not allowed to call Champion or start in the champion class. Now called Diva officially (well not quite official, application is on the way) “Ch. Diva Slatina de l’Hermitage d’Eole”!

In addition, we were with our Russkiy Toy bitch Baya very successful weekend in Kassel is behind us. Baya got on the first day in the Intermediate Class V1, VDH, CAC, BO! On the second day she got also the V1, VDH, CAC and Res CACIB. However, more exciting for me was the ZZP on Friday! Baya has passed without limitation and with predicate breeding license!! We are very pleased! Now she’s just become in heat, so we are planning our first Russkiy Toy litter with her around July / August 2014. The stud dog is not fixed yet, it will definitely be a black / tan short hair male. Gladly I already do accept request!

It was a very nice weekend!!!!

Amei has been picked up today. She now lives with a family Freund in Marl with the 6 year old borzoi-male “Fjor von der Windhundranch”! We are very happy for Amei, Fjor and family Freund!

Beyza iz mira älf is back. Sie is reserved but not sold. Inquiries I appreciate.

Leyla (Banja) get at her first dog show vp1 with puppyBOB. We are very proud and are pleased with Dagmar and Uli… keep it up!

Michael was with Diva for a intern. Coursing in Großenaspe. After a not so good first round, where she lost the lure and with point deductions, Diva showed that it doesn’t happen twice. She shows in the second round a very fast and great run. Diva could make out of position 8 the 2nd place. So she get the Res.CACIL and the CACC ….. the fourth, she is now new German Coursing Champion!! We are soooo proud of our little French Lady!

At the German Winner Show in Dortmund get Diva and Adasha in a big class both a EXC.

And again the third place with Res.CACC for Diva at the international coursing on 05-10/2013 in Ostercappeln. We are also very happy about this success.

Yesterday Baya and me were at the CACIB in Hannover. What shall I say, after a not so good result in Dortmund get Baya in Hannover in the intermediate class (first time) the EXC1, CAC, VDH, BB and BOB. Well done Baya! We are soooo proud!!!!!

Where it did not work in Volkmarsen and Hoope, because Diva has her own “head”, she was at the German Coursing Winner 2013 very routinely again. She runs two great and continuous rounds and get with this the 3rd place of 25 femals. We are very happy about it!

Adasha and me were on saturday and sunday on the dog show in Bremen. On saturday at the CACIB, Adasha get in the intermediate class EXC1, VDH and get also the CAC and the Res.CACIB!!! We are very happy. On the next day Adasha get also the EXC1, VDH, this time with Res.CAC. A successful weekend, we are very proud of our only 22 month old “Snowflake” ! 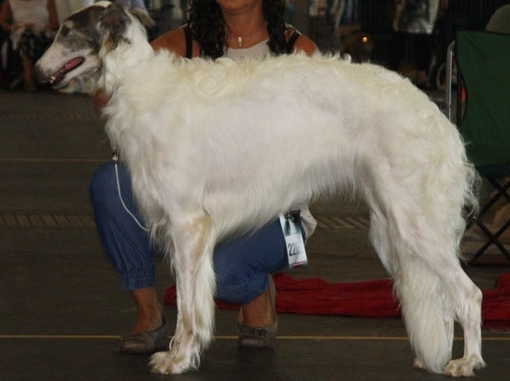 At the weekend Stephan Locher was with “Ajoscha iz mira älf” and his father “Leonid vom Tollhaus” on the dog show in Darmstadt. Ajoscha get the EXC1 in the interm.class with VDH and CAC, now he is waiting to finnish the Championship (in January?). Leonid get the EXC1 in the champion classe with VDH and also the BOB and especially we are happy about the BIS!!!! Congratulations Susa, Stephan, Ajoscha and Leo!!!!

Yesterday we were on the dog show in Issum. There Adasha get in the intermediate class her third EXC 1 in a row with VDH and also Res.CAC. We are so happy, that Adasha inherits the CAC of Stepun’s Chaska! “Asinja iz mira älf” owned by Sabrina Hoppe get the EXC3 with a very nice judgereport

Jippie ay ey! We are sooooo proud of “Dikaja Varjag”, the father of our B-litter. He get on the European Coursing Championship the 3rd place of 39 males! Well done!

New pics you can find unter “B-Litter” and very single puppy (under B-Wurf). I have received new photos of the now 3 year old Varjag. Such a chic guy and also again very successful in sport, at the weekend he could get the 4 place in the international coursing.

What can I say, how to say it. That’s really very sad sad news. Yesterday in the night I feel something is wrong with Bargusin, so I went in the morgning to the vet at 9:00 a clock. During medical treatment, he entered into a state of shock, he got agonal gasps. The vet has put him on a drip and kept him in the clinic and I still can’t believe it, at 11:30 clock, I got a call that he has stopped breathing and has just died. The other beloved puppy and their care give me the strength. I’m so unspeakably sad!

Each puppy now has its own page under “B-Wurf”, and I have uploaded photos of the one-week-old puppies there. They grow and thrive very well!

Yesterday I was with Adasha at the dog show in Münster. She get in the intermediate class V1, VDH and her sister Amei V2 with Res.VDH. Supi!!!!

On the weekend we were at the Borzoi-Year-Show 2013 in Hoope. There our Bogisha won the very strong Champion class with V1, VDH. Her son “Ajoscha iz mira älf” started in the Intermediate class and he was able to get V2 Res.VDH. We are very proud about mother and son. And also about the father of Ajoscha “Leonid vom Tollhaus”, he get in a also strong Champion class V2 Res. VDH. A very successfully “Family result”

Today on day 23 I was with Diva for ultrasound at the vet. The diagnosis was clear, Diva is pregnant! We’re really looking forward to the puppies from Diva and Varjag!!!

We were with Diva for 1 week in Sweden and we have spent a great and hospitality time there . For this we thanks Yvonne and Lars-Göran! On the 27. and 28. of febuary mated Varjag after tenderly getting to know our Diva. So we hope for puppies in the end of april/the beginning of may.

After to get the titles German Junior Champion DWZRV and VDH and two “Landesjungendsieger” in a short time Ajoscha iz mira älf (live with Susa Leeb and Stephan Locher) get at the CACIB Nürnberg in the interm.class the first CAC and also the CACIB! We are so proud…. keep it up!